Raize 2022 is also the first Toyota car in the Philippines to use Turbo engines. Many people are concerned that Raize is both weak and tight. So many instead of this new model would like to choose Avanza to have more space while traveling. So who is the winner of the combat Toyota Raize vs Avanza? Let’s find out the answer when comparing Toyota Raize and Toyota Avanza specs and price Philippines.

Toyota Avanza vs Toyota Raize: which one is the winner?

Toyota Raize vs Avanza: Outside design

Looking directly from the front, the Toyota Raize is attractive with a grille cluster that looks quite aggressive. The grille is located in a monolithic with the lower air cavity forming a hexagon extending to the sides. The top uses a diamond pattern, and below are long horizontal bars.

Not inferior to rival Avanza, Toyota Raize is also equipped with Full LED headlights divided into 4 delicate compartments. The distinct LED strip for daytime positioning is positioned low next to the fog lights. Black plastic covers the whole front bumper, giving it a solid and substantial appearance.

The entire front bumper is covered with black plastic, giving it a strong and sturdy feel.

Avanza has an appealing exterior

Meanwhile, a prominent decorative detail on the new generation Toyota Avanza is a shiny chrome strip extending from the grille through the headlights, along the bonnet, and ending in the D column. The Rearview mirror cluster has also been moved down, while the wheel arches give a strong and powerful appearance like an SUV. 17-inch alloy wheels with a dual 5-spoke design are included with this Avanza variant. At the rear, the taillights are connected by a strip of lights extending the entire width of the rear area. The words "VELOZ" are precisely positioned underneath the Toyota logo in the center of this light strip. These pictures depict the Toyota Avanza Veloz variant, therefore there might be a small difference in appearance from the regular model.

The interior of the Toyota Raize 2022 also features a brand-new, sophisticated, and more modern aesthetic that departs from the tradition of Toyota's affordable vehicles. A large floating car screen is located in the center position. The air conditioner cluster is neatly arranged. The shift lever is moved higher.

The main material is still plastic. However, thanks to many decorative silver-plated details, plus a new style, it brings a more luxurious feeling.

Toyota Raize is like a mini SUV, so the space is only enough. And hardly can ask for more. However, thanks to the impressive wheelbase of 2,525 mm while the vehicle length is only 3,995 mm, the Raize interior is also relatively spacious and comfortable. The seat system is upholstered with felt fabric.

On the other hand, the Toyota Avanza specs inside blow drivers’ minds. The cabin no longer feels boring like its predecessor, instead, it has a more modern and premium look.

The dashboard has a clean, slimmer design that doesn't look too harsh or out of place in the cockpit as a whole. Additionally, there are silver accents and lovely lighting strips around the shifting region. The 9.0-inch infotainment screen of the Toyota Avanza 2022 is compatible with Raize.

The vehicle has a hexagonal digital instrument cluster and a three-spoke steering wheel with practical function buttons that may have been influenced by the Toyota Raize. Notably, the traditional brake has been replaced by an electronic handbrake on the Toyota Avanza 2022. Passengers in the back seats can watch movies on a sizable screen that is fixed to the ceiling.

>>> Suggested for you: Toyota Rush pros and cons: What are they?

Toyota Raize price in the Philippines is a bit lower than that of Avanza.

In the Philippines, Toyota Raize 2022 is distributed in genuine versions including 1.2 E MT and 1,0 Turbo. The reference rolling price is as follows: The former one starts at P751,000 and the later has a price of about P1,056,000.

The latest generation Avanza sold four versions and the price ranges between P833,000 and P1,059,000. So it is quite the same as the price in Raize. This valuation of Avanza and Raize shows Toyota's ambition to compete fairly with rivals.  The appearance of this duo also ended Rush's journey in the Philippines.

Both Toyota Raize vs Avanza have their own advantages and disadvantages. It is up to you to find out which one is better. Hopefully, after this article, you can make a decision to choose a winner in this combat. 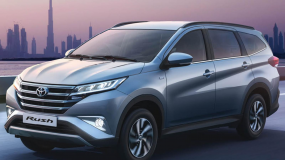 Toyota Rush pros and cons: What are they?