5.0 Price: ₱1,992,000 |Transmission: Shiftable Automatic |Body type: Sedan
Share:
The Toyota Camry 2019 2.5 V is the latest version of Toyota's well-known sedan that has now shaped up to be more stylish and comfortable than ever before.
Table of contents

For decades, the name Camry has been heard in the vast echoing bowels of automotive lore the world over. It has been a mainstay vehicle running on our roads that have been used by many types of people for being a no-nonsense, reliable and versatile car.

Now the Camry started out its life all the way back in 1982 and back then, the Camry was a smaller, more compact vehicle. The name itself, however, dates further back to 1979 to another Toyota sedan called the Celica Camry. It was then at 1982 where the Camry became its own model which stood apart from the now defunct Celica line.

The Camry after several years since then has become one of Toyota’s “World cars” like the Corolla because like the Corolla the Camry has indeed been around in multitudes of countries. Even in the 2nd hand market, older Camry’s have been the go-to answer for a first car or if you just want something very reliable.

Want something with affordable and good as a daily driver? Get A Corolla. Want something a little more upmarket? That’s where the Camry goes in.

The Toyota Camry 2.5 V is the higher trim level of the latest iteration Camry available here in the Philippines. Now in its 8th generation, it has a number of changes done to it which is quite visible from its exterior styling and interior design.

As you guys may well know, older versions of the Camry even the XV 40 generations which ran from 2006 to 2011 and to some extent the XV50 the 2011 to 2018 version didn’t actually stand out in terms of looks. It was even safe to say that it’s the very mental image that pops up inside your head when you hear the word “vanilla sedan.”

That, however, has changed for the Toyota Camry 2.5 V (XV70) because Toyota really did drastically change its appearance. Now, the Camry has a more upscale image which it owes a lot to the numerous artful character lines that run around its body.

It is now also curvier and more reflective of more modern car designs thus leaving the “vanilla box” image that its predecessors had. Thanks to those curves, the new Camry can be deemed as more aerodynamic and that can potentially mean better gas mileage. And yes friends, it now does look much better. 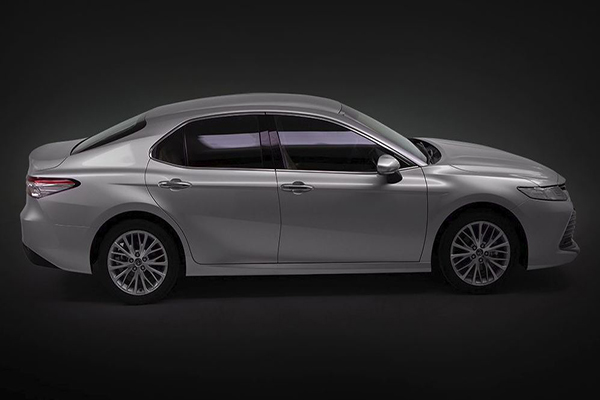 Size wise, the 2019 Toyota Camry 2.5 V is a little larger overall as it is now measured to be 4885 mm long, 1840 mm wide, and 1445mm high. What Toyota reduced in the new Camry however is how far it sits from the ground; it is now lower by an inch giving the vehicle a ground hugging, sportier look and feel which would definitely add more to its handling, but more on that later.

Up front, the 2019 Camry 2.5 V still has that large chrome grilled and air intake which are now wider and much more angular. Faux vents on the new Camry are also minimal in comparison to the previous version and that is indeed a relief. Apart from those, the new Camry still has those slender HID headlights with the signal lights integrated into it.

At the rear, the 2019 Camry now has a very tastefully elegant ducktail that we will assume functions somewhat like a spoiler. Regardless to its usefulness though, the ducktail is a welcome addition for its styling. What adds further for the style points of the Camry are the dual exhausts adding more to the stylish symmetry of the vehicle. The rear lights are also updated to be much more slender giving the car a sportier, sleeker look. 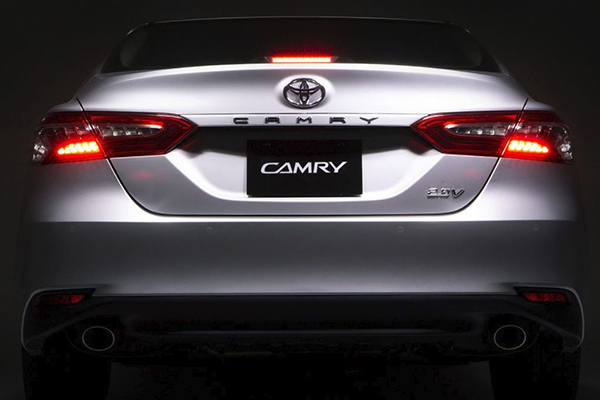 The rear design of the new Camry 2.5 makes the vehicle sportier.

Overall, looks wise, the Toyota Camry 2.5 V is now stylish, modern and almost burgeoning into premium car territory. Not to mention that because of its larger size and lower center of gravity, the car also has better, more elegant road presence.

What immediately comes noticed by one’s eyes upon entering the 2019 Toyota Camry 2.5 V is the vehicle’s dashboard which features something new. The center console is massive and now features a y-shaped, slanted looking shape that adds to the stylish curves inside the vehicle.

While that might take a while to get used to for some people, the position of the buttons and controls are overall very ergonomic and logically spaced from one another. For this model, Toyota has changed as to how they implemented faux wood panels giving the new Camry a more muted, more textured posh look.

As for the touchscreen infotainment itself, it’s fairly easy to learn how to use and it’s linked to a 9 speaker system from JBL. The image quality however of the rear parking camera is a little bit blurry and therefore needs some improvement. 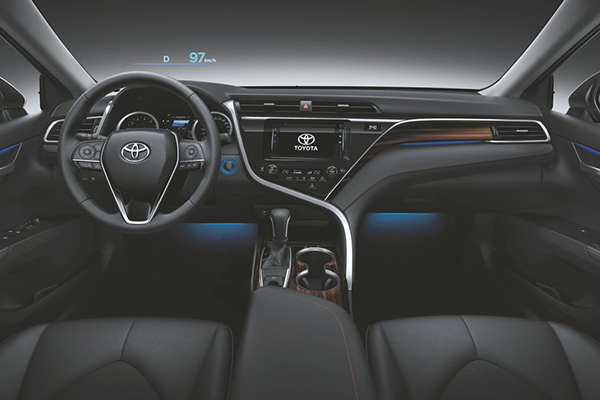 A look on the 2019 Toyota Camry 2.5 V's comfortable and high quality front cabin

The seats of the new Camry can be adjusted automatically and has sufficient lumbar support and as such are very comfortable indeed. The rear seats offers sufficient headroom and legroom but not only that, rear passengers also have window blinders and of course rear AC vents are also present.

Speaking of storage, the Camry’s trunk is quite spacious as it is about 10 liters larger than the previous models and as for the interior, one can find enough bins and cupholders for the rear and back seats for everyone. 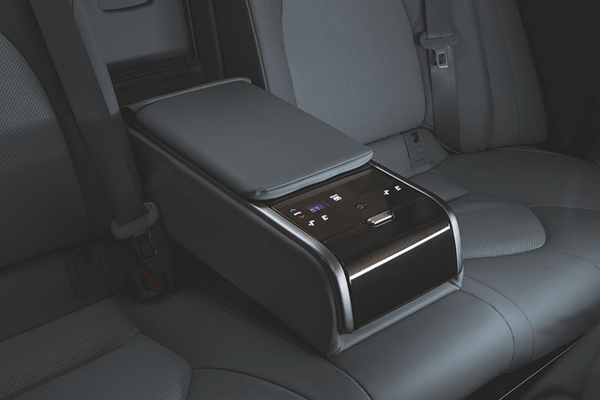 The rear passenger cabin of the 2019 Toyota Camry 2.5 V has a retractable arm rests which also has hidden cupholders and controls for the reclining rear seats 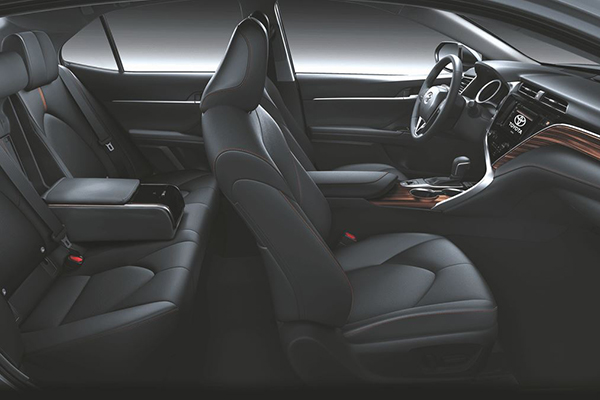 Overall, the interior of the 2019 Toyota Camry 2.5 V is a safe, comfortable space

As we’ve mentioned before, the Toyota Camry comes from a long line of previous generations so it isn’t a doubt that Toyota has perfected the safety aspect of the current version of the vehicle. As such, the new Camry comes equipped with ABS, crash sensors, child safety locks, side airbags, driver and front passenger airbags, electronic brake force distribution, tyre pressure monitor, vehicle stability control, and many others.

Due to the reduced ride height of the Camry 2.5V, the car is now surprisingly more agile than ever before. It can now take corners more gracefully without sacrificing ride comfort provided you’re zipping along on a smooth road but more on that later. It also has less body roll which was typical of the old Camry. All of these is of course a very welcome change for everyone and is more appropriate for the upmarket, premium vehicle which the new Camry has shaped up to be.

Despite having numerous changes done to the overall look and driving feel of the vehicle, what didn’t change however is the engine which is still a 2.5 liter four banger. What upgrades Toyota did make however can be reflected by the six more horsepower it can make. That sums it up to about 175 hp sent to the front wheels.

The torque however remains the same with 231 Nm of torque. As for transmission, the Toyota Camry 2.5V comes only with a 6 speed automatic. To actually see and experience the “Toyota reliability” we always hear from those Toyota fan boys however, a more thorough, yearlong ownership review might be required. The 2019 Toyota Camry 2.5 V's engine is known for being reliable. Some even say indestructible

Overall, the new Camry is now a joy to drive around corners compared to the rolling, waddling mess the previous versions did. One tradeoff to this however is that the ride can be quite stiff at times especially when driving over bumpier driving surfaces common here in Philippine city roads. Do not deter you though as the Camry is still a comfortable sedan even when filled up by five people.

For more news and reviews keep posted here at Philtoyota.com.