The Toyota Land Cruiser has been around since the 1950s and has been tried and tested in its on- and off-road prowess. Its capability is indisputable and is known as one of the toughest vehicle models delivering monster performance.

The question remains though: Is it worth the P4.74 million (at least) tag price? Let's find out in the in-depth Toyota Land Cruiser 2019 Philippines Review by Philtoyota.com.

2019 Toyota Land Cruiser exterior especially the fascia doesn’t slap your face with “Oh! I am a Luxury SUV” and “Oh! I’ m a beast off-road!". But it rather looks friendly and neutral.

For the exterior, you get LED on fog lamps, daytime running lights, high and low beams. The size and looks of the front grille are not overwhelming at all.

Right in the Toyota emblem is where the Toyota safety sense is. There is an odd lamp on the hood that gives it a character on the front. it also gives more visibility.

You have 18 – inch alloy wheel. Power folding and auto-dimming side mirror, towing hitch, running board, and automatic wiper and windshield wiper.

There is a chrome accent on the lower side of the running and the window and there is a crossbar at the roof.

Looking at the back, it still isn't flashy; its boxy shape is noticeable and there are also LED light which is nice during night time. There are chrome accents at the back and in the middle is the Land Cruiser name. 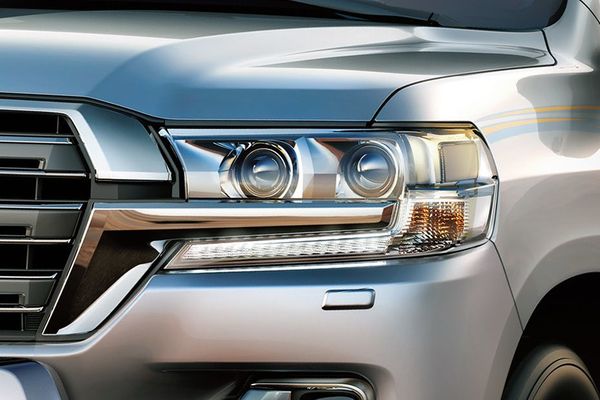 For the Land Cruiser exterior, you get LED on fog lamps, daytime running lights, high and low beams

At your door there is a wood and aluminum touch to it, the armrest at the door is so soft and covered by leather, you have also there your seat setting, power window, lock controls, cubby storage at the bottom beside the JBL speaker.

All of the seats are wrapped with leather, with a touch of aluminum, adjustable, heated and cooled seats.

The dashboard in the Land Cruiser 2019 interior is soft-touch plastic. The center console is equipped with 9-inch touch screen display, wireless charger, USB and AUX port. The button for CRAWL control is also at the center console. 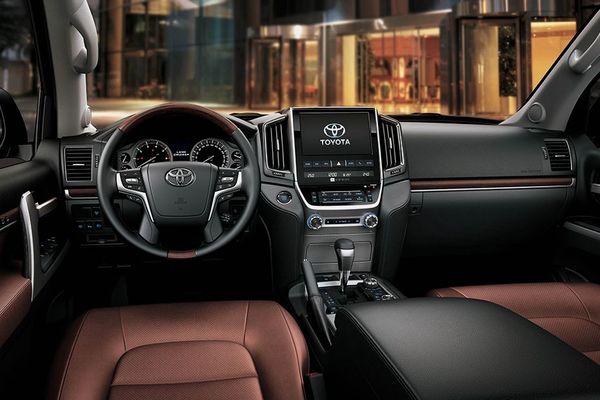 The dashboard of the Toyota Land Cruiser is soft-touch plastic

The armrest is soft and still wrapped in leather material. What makes it more interesting is, it can be used as a cooler for your drinks and snacks.

You have a button to turn it off and use it as a storage for your stuff. You also have an auto-dimming mirror with a home link underneath, sunglasses holder, LED lights and sunroof.

The second row is also alluring. You get an 11-inch screen to watch movies and stuff. You also get Toyota wireless headphone, 2 vents with its control, headphone jack, volume control, HDMI port, heated and cooled seat control, 12 vaults and under vents under your seat.

For the space of the second row, a six-foot-tall passenger will fit but still lots of legs and headroom. The third row of Toyota Land Cruiser is a bit disappointing though.

An adult passenger won’t be any comfortable on it and nothing much is going on, but just two cup holders on both doors. If you are going on a trip with kids they can sit in the third row.  All the seats on Toyota Land Cruiser are leather and very comfortable. 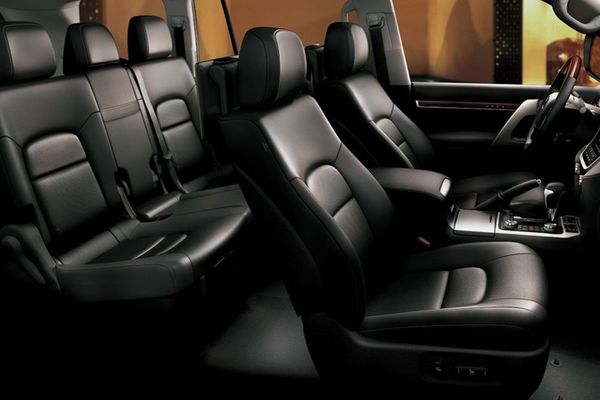 The second row is also alluring. You get an 11-inch screen to watch movies and stuff

For the engine, Toyota Land Cruiser has the powerful V8 engine, 5.7 liters, pump a 381 horsepower and 401 pound-feet of torque. This is an eight-speed automatic transmission, four-wheel-drive system, and an 8,100 pounds towing capacity.

The Toyota Land Cruiser despite being a large SUV is easy to drive. It also has tire direction display that makes it easier for steering. The power and brakes are magnificent and definitely drivable off and on-road.

Well, thanks to CRAWL control with turn assist, it does make it stable and easy when driving off-road. This is an advanced system that automatically adjusts to 5 low – speed settings. For a tighter turning radius in CRAWL mode, you have the turn assist to do the job.

Overall, the ride is commendable. It is a quiet and noise is confined with the wind and road noise. Its ability to keep the ritzy ride even on the trail is admirable.

I love the exterior of the Land Cruiser. Other people might find it dull, but its features are functional for the vehicle it was created to be. The interior is not grand and stylish but is made of quality materials.

The vehicle has a decent amount of storage. A third row is a nice option but I am not a fan of their folding seat.

It’s a hassle to assemble and they could have made it easier to by having a button to automatically do the job for you. Also, there are too many buttons. Since it is a large vehicle, some buttons on the dashboard are difficult to reach.

The Toyota Land Cruiser is perfect when it comes to road capability. At the same time, it gives you good entertainment and comfort while you are on the go.

While making this review I fell in love with this SUV and will highly recommend anyone to get it, if budget permits. Go on a road trip adventure right away! At its tag price, it’s definitely worth it.