Among Toyota’s consistent best-selling models in the Philippines is its popular Hiace van, which has been a mainstay of large households as well as company and transport fleets.

With the Philippines being the biggest Hiace market outside of Japan, it’s not surprising to find the van at almost every road trip, beach outing, and transport terminal. Toyota now hopes to continue this success with the launch of the All-New Hiace.

This latest iteration represents an evolution of Toyota’s legendary van, with a new exterior style and improved interior amenities for both driver and passenger alike.

One of the more noticeable aspects of the HiAce is the massive size of the Tourer variant, being 5915mm long, 1950mm wide and 2280mm high. The length alone dwarfs the previous Hiace LXV Super Grandia’s 5.38 meters and even the Ford E150’s 5.5-meter horizontal measurement.

On the one hand, this translates into a spacious interior for passengers. On the other hand, this might spell trouble for whoever is going to be behind the wheel, driving such a humongous vehicle around the city’s narrow streets with lots of tight corners. 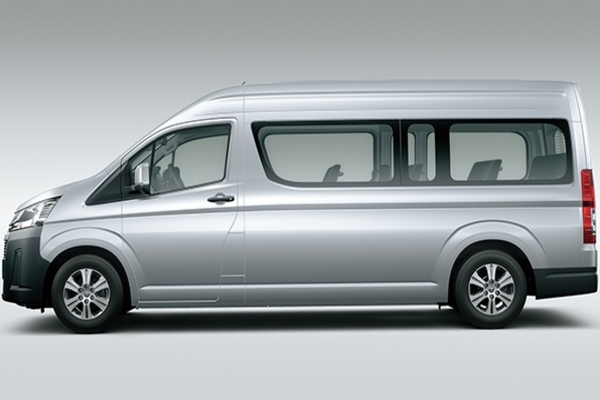 A modern evolution of the legendary Toyota van

At 1,950 millimeters, the Tourer is wider than the previous version’s 1,880, yet falls just a tiny bit short of the 2-meter measurement of the Ford E-150.

It’s also the tallest in the range with a 2,280 mm allowance. While the increased dimensions certainly bode well for passenger convenience, it might present a problem for those with a small garage or when going to parking areas with low headroom.

Let's find out more about this van in our Toyota Hiace 2019 Philippines Review by Philtoyota.com

The new Hiace has one interesting detail that stands out: the presence of a semi-hood, which also contributes to the van’s bigger size overall. Its complemented by a revised front end with sloping headlights. As a people carrier, the Hiace is still boxy, but it looks more of a head-turner now with that redesigned leading edge. Chrome accents on the grille add a premium look. 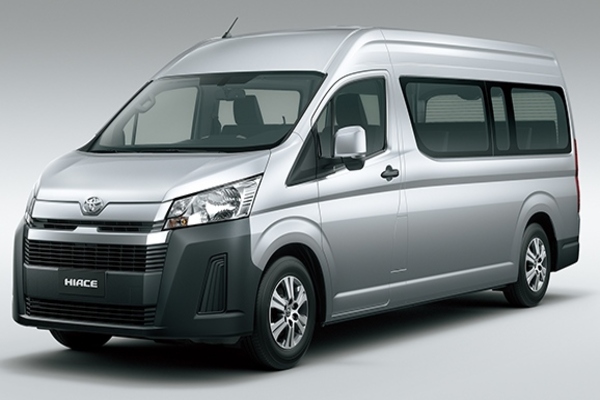 Still boxy, but at least it’s now a head-turning box

A pair of massive front doors enables the driver and front passenger to take their places inside the cabin. Despite the doors’ size, they’re not overly heavy. The increased height means easier ingress and egress on the new HiAce compared to the old one.

Inside, the dashboard has also been improved in terms of aesthetics and functionality. Not quite Lexus-level of course, but definitely a step up from the older model,  with two-tone gray and cream beige hues that generate a more upscale feel.

The Toyota Hiace Grandia Tourer's seating capacity is up to 14 with airy surroundings, while upholstery wrapped in a combination of fabric and vinyl. The seats can be individually reclined, while the last row can be folded up to expand the Hiace’s cargo-carrying capability. The front center passenger seat on the base Commuter variant is replaced by a console box on the upper trims that can be utilized for storing loose items. 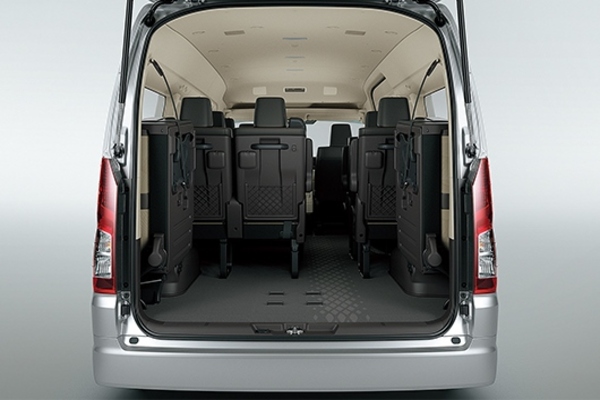 Taking the wheel of the Hiace, the driver is afforded a field of view that one usually finds on SUVs – a crucial feature on long trips. Toyota did away with the dual sliding doors on the new Hiace, opting for a single sliding door on the right side, and it’s not remotely-actuated like the one on the Alphard. At least the door feels substantial, although some passengers might have difficulty with the step-in height. A new generation 2.8L 4-cylinder powerplant with variable turbo and intercooler lurks under hood of the all new Toyoa Hiace, a significant upgrade over the previous 2.5L turbodiesel mill. The fresh engine produces 163 PS and 420 Nm of torque. A choice of six-speed manual or six-speed automatic is available across the range.

The driving experience on the new Hiace surprisingly belies its heft; it feels more like driving an SUV than a van or a minibus. Despite its length, this Hiace can be maneuvered around ninety-degree corners easily. We’d probably recommend against fitting a roof rack, given that it’s already tall enough to be turned away at low-ceiling parking areas. Besides, with a cavernous interior, a roof rack would be practically unnecessary. 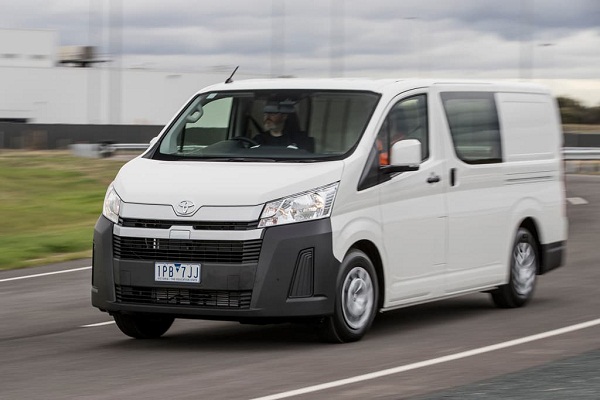 With Toyota Hiace, it feels more like driving an SUV than a van or a minibus

>>> Check out the best Toyota Hiace deals near you

The semi-hood becomes the single most significant improvement on the all-new Hiace. For one thing, it does away with the bulge in the cabin where the underfloor engine used to be, improving interior space. Transferring the engine forward has reduced noise, heat and vibration significantly.

The raked windscreen and hood provide better stability and aerodynamics at speed, and, the semi-hood acts as an additional crumple zone in the event of a frontal impact. The increased dimensions translate into larger interior capacity as well, perfect for Filipinos who love to bring everyone on board wherever they’re going.

All in all, looks like Toyota has another larger-than-life winner on their hands.