5.0 Price: ₱1,420,000 |Transmission: Automatic |Body type: SUV/MPV
Share:
The Toyota RAV 2019 is ready for its launch before year-end. Read on to find out more about this venerable compact SUV.
Table of contents

* Don't forget to check out the latest Toyota RAV4 Philippines release date and price updated at the end of the article.

Toyota RAV4 - model that created the small SUV segment did make its 5th-gen premiere at the 2018 New York International Auto Show in March 28.

Throughout the years, the Japanese automaker has listened to its valued customers and dealerships. And for now, it’s paid off.

In fact, the RAV4 volume has doubled over the last 5 years, spelling out the vehicle’s growth and attractiveness and more importantly, its popularity. In the Philippines, the Toyota RAV4, no matter the trim, is a winning choice whether it is for a weekend trip to the countryside, a jaunt on the trails or just a city runabout. To gain a better understanding of the current offering, you can refer to our Toyota RAV4 2018 Philippines review.

It’s been foretold that the all-new 2019 Toyota RAV4 will debut in the forefront both for the brand and its class. While waiting for the production RAV4, let’s say something about it.

Toyota designers bear in their mind design elements of Adventure and Refined so that no matter the time or place, drivers are able to get up and go in the all-new RAV4 2019. The auto manufacturer has maximized the showing of a little SUV while remaining high levels of subtlety inside and out.

Each body panel gets a complicated twist to it, with a chiseled silhouette which is a perfect blend of charisma and athleticism.

Up front, a stronger nose boasts a more dynamic profile while sturdy shoulders as well as 19-inch alloy wheels make for a more powerful stance ready to challenge any kinds of terrain. Riding on the TNGA platform, the new RAV is well capable of adopting the charisma of a sharper and tougher SUV, yet in a package which is wider and lower. Besides, a confident and stable driving platform is also provided by a longer wheelbase and wider tracks.

For off-road capabilities, shorter overhangs at both front and rear allow the car to conquer tough roads.

Side mirrors are also relocated lower on the door to increase forward visibility around the A-pillars. Meanwhile, visibility on the side is enhanced owing to a shorter beltline and better rear-diagonal visibility enlarged is thanks to an enlarged and revised rear-quarter glass.

Below is the dimension comparison between the two generations of the Toyota RAV4.

A spectacular arrangement in the Toyota RAV4 2019 interior is apt for a wide array of preferences and driving experiences. Modern, premium and uncomplicated are our words for the SUV.

Positioning between front passenger’s seats is a center console with a relocated Electronic Parking Brake for easier accessibility. With increased console’s volume, an open tray, side-by-side cup holders and optional Qi wireless charger, ergonomics in car are significantly intensified. At the same time, the top of the shifter is adorned with a standard smooth boot and tactility is also further brushed up with HVAC knobs at the center panel.

Every 2019 RAV will have an Entune 3.0 multimedia mounted on the dash, which is integrated with Apple CarPlay, hands-free access to Amazon Alexa and Wi-Fi Connect. The Standard system holds a 7” touchscreen put atop the center stack. The Plus version comes with Sirius XM Radio and a larger 8” touchscreen. Exclusively to the Premium, dynamic navigation is embedded. Also, there are up to 5 USB ports available in the cabin.

Complementing the Toyota RAV4’s multimedia system is an all-new JBL audio system with new speakers design, tweaked system architecture and tuning process. All are for a big music concert right from inside your vehicle.

As per space, passengers at rears are currently given more legroom. The cargo space is also expanded with side nets and a reversible liner. Of course, fold the rear seats down to load more stuff.

It can be said that the overall design of the 2019 RAV4 largely evokes a mixed style between the Tacoma and the Future Toyota Adventure Concept (FT-AC) previously launched at the 2017 Los Angeles Auto Show.

You might not know that Toyota did work for 4 years to fine-tune every facets of the 2019 RAV4 performance, ride comfort and also, handling stability. The ultimate goal is simple that is a Natural and Confident driving experience.

In truth, the unmatched performance of the RAV4 was detected by a group of takumi (Toyota’s highly-trained master craftsmen) who attempted to build a car that acts/reacts as the driver’s intention no matter how road and weather conditions are. Honestly, the join of takumi in the development process of the new RAV4 was another layer of improvement to the general design approach headed by the TNGA philosophy. They zoomed in ameliorating the performance at multiple stages of the process in order to make an ever-better Recreational Active Vehicle.

For the 2019, power is sourced from two types of powertrain:

The takumi has been error-free with the development process of the RAV4’s configuration and structure to reach an increased performance as a whole. The power plant makes use of a variable control system and high-speed combustion technology for better thermal efficiency output that minimizes energy losses associated with cooling and exhaust systems as well as the movement of mechanical components, amidst other factors.

Thanks to a 40% thermal efficiency (41% for hybrid models), the 2.5L inline-4 Dynamic Force mill is ideal for the next-gen Toyota RAV4 2019 which delivers not only highly responsive but fuel efficient driving experience. In the meantime, the Direct Shift 8-speed automatic gearbox proffers direct lock-up from gears 2 through 8 to get rid of power loss from the torque converter for smoother shifts.

Additionally, the Dynamic Torque Vectoring AWD with Rear Driveline Disconnect is incredible enabling the driver to steer the car as intended, even when in the harshest terrains. This drivetrain can spend 50% of engine torque to the rear wheels and distribute it to these wheels for delicate handling. In case the AWD is not required (on expressway, for instance), the SUV will drink less fuel due to the Rear Driveline Disconnect featuring the world’s first-ever ratchet-type dog clutches on all the wheel shafts. These clutches are in charge of stopping the driveshaft’s rotations and then transferring the driving force to the front wheels to appreciably decrease the engine losses and rotational vibration for better ride and at the same time, to enhance gas mileage.

The AWD is one of three available systems on the new RAV4, joining the existing AWD-i on the hybrids and the non-Dynamic Torque Vectoring on core gas variants.

When working in tandem with the AWD-i, the total torque to the rear wheels on the new RAV4 Hybrid goes up by 30% for high off-road performance, ability and handling when compared to what equipped on the outgoing model.

In the main, the unparalleled driving experience created is just one of the ways this next-gen RAV4 2019 goes beyond expectations for its prospective owner, its segment and the whole automotive industry.

This is a new member in the RAV4’s Hybrid family which promises to satisfy all drivers who adore sportier driving dynamics. To all intents and purposes, the RAV4 XSE Hybrid is a unique combination of sporty and utility. 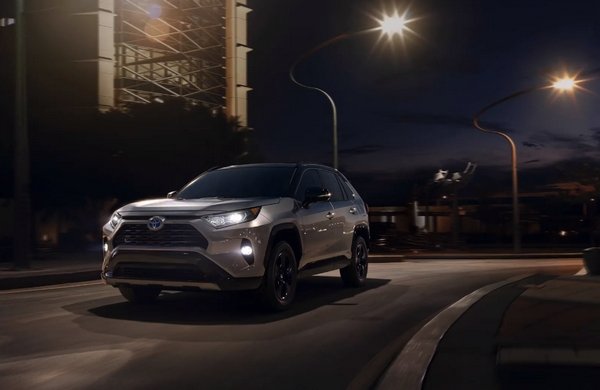 In the matter of performance, thanks to boosted power and acceleration, the Hybrid is no compromise at all. When coupled to the sport-tuned suspension with springs and tauter shock absorbers, the XSE Hybrid takes the crown as the fastest and best-handling trim in the lineup. Behind its wheel, drivers can look forward to increases in power, acceleration and class-leading fuel economy, respectively.

According to Toyota, the XSE Hybrid will be decked with 2-tone exterior paint scheme (black roof matched with Magnetic Gray Metallic, Blizzard Pearl, Silver Sky Metallic or all-new Blueprint) while the inside is embellished with mono-tone: black Softex material, with highlighted blue accents.

The inside is embellished with mono-tone: black Softex material, with highlighted blue accents 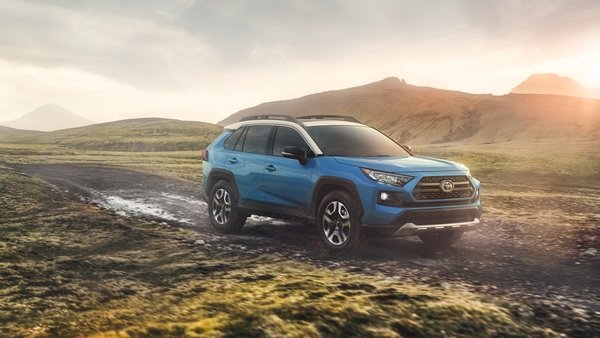 Apart from standard supplies, the robust Adventure is likewise pampered with the Multi-Terrain Select allowing the drivers to maximize traction when traversing sand, mud or rocks.

Color-wise, this model will be furnished with an Ice Edge-colored roof mated to:

In the cabin, black and the all-new Mocha-colored Softex are two interior finish options with orange stitching accents throughout.

This is the top-of-the-line RAV4 which serves as an ideal company during every ecstatic weekend retreat.

Being a top-spec RAV4 2019, the Limited’s gadgets and amenities will certainly befit its premium style. Outside, it’s exclusively fitted with a set of 19-inch alloys separating it from other lower-end variants. Now, step inside so that you deeply can feel its essence.

There, an 8-way power-adjustable driver’s seat with memory and two-way lumbar support, a front-row moonroof, a redesigned 7-inch Multi-information display and especially, a Digital Display Rearview Mirror come as standard. In fact, this display is merely a traditional rearview mirror yet is added the flip of a switch for a better vision behind the car thanks to an adjustable, high-mounted wide-angle HD camera affixed at the rear end. 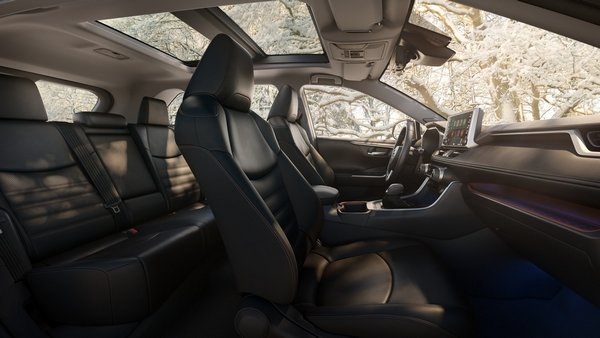 With regard to safety, Toyota keeps leading the pack with its 2nd-gen Toyota Safety Sense (TSS) with new active safety features that focuses more attention to protection. Here Philkotse.com notes some of the most noticing features.

Aside from these, the brand’s Star Safety System is also fitted as standard, including:

At last, available safety technologies that can be listed are:

We reckon that many of you will face a few common questions about the 2019 RAV4. So, here we have Q&A section to wrap up our review.

Question #1: When does it go on sale?

It is set to be released around December 2018. The Hybrid model will come a few months later in early 2019.

Given that Toyota Motor Philippines also sources the RAV4 from Japan, there is high responsibility that the PH-spec RAV4 will be handed down sometime after the Japan units launches, likely in mid-2019. The RAV4 is set to be released around December 2018

Question #2: How much will it set you back?

Since we’re unsure about the arrival of the new RAV4 in our market, the Toyota RAV4 2019 price in the Philippines remains secret for now.

Question #3: Where is it made?

Latest news from Toyota tell us that the company has started the production of the 2019 RAV4 at its Nagakusa Plant in Japan.

With everything the Toyota RAV4 2019 has to offer, it is highly recommended for you to wait for the 2019 model to debut. However, in case you have little patience with the upcoming car, sure thing, you can definitely go for a 2018 unit. In closing, take a look at the Toyota RAV4 2018 price in the country.

According to the latest car news, the Toyota RAV4 2019 has been already launched in the Philippines with an aggressive look. Its prices are also accordingly announced, raging from P1,638,000 to P2,188,000: